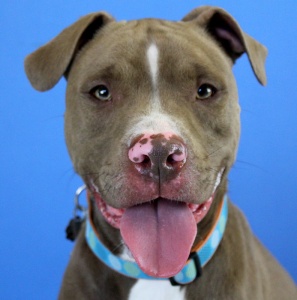 Hi humans!  What’s new with you?  I’m excited ’cause i just found out I getta go to Hamburger Mary’s tonight for a charity bingo thingy (I guess Bingo is a game you humans like to play) that will benefit HSGKC!  It’s from 7:30-9:30 pm, and I’m goin’ and so are Romy, Luke and Marvin!  I like goin’ to fundraisers ’cause I can give all the kisses I want!  And, I get lots of treats and attention, so it’ll be fun and I’m hopin’ that maybe someone real nice will meet me and wanna make me a member of their family.   Anyways, for more info ’bout where we’ll be tonight, check out hsgkc.org.

I wanna update ya on some of the adoptions, too… like Nemo got adopted again!  See, he had to come back here ’cause things weren’t workin’ out so hot for him in his new home… not his fault, and not anyone’s fault really… the other doggy decided he’d rather have his humans all to himself and didn’t wanna share with Nemo.  But, that happens sometimes, ya know?  Just ’cause we’re dogs doesn’t mean we all like each other!  So, this nice family came in and were wanting to maybe adopt a girl puppy, but Christine introduced them to Nemo and they fell in love with him!  I’m happy he found a new home pretty fast… and I’m ready for one, too.  Echo got adopted, too!  She’d been here for almost a whole year, but like our humans say… eventually a human or humans find us! Bianca is a lil sad without her BFF, but she’s gettin’ lots of extra attention from Jai, and Bianca and Zappa are workin’ on bein’ friends, which is cool.  Sasha was adopted and Mila, too!  Pete (fka “Skinny Pete”) went to a foster home last week, too… so lots of things have been changin’ round here.

One other thing I wanna tell ya ’bout that I’m real excited about… and other dogs, too, is the BEG Program is starting!!!  I think Radar and a couple other dogs have kinda mentioned it when they’ve blogged.  I dunno ’bout all the details, but Pete’s got lots and lots of ideas to help all of us dogs while we’re here waiting for our forever homes to enrich our lives with stuff like agility, and to help prepare us for our forever homes.  He’s awesome!  We’re excited ’bout it… and we’ll fill ya in when we know more.  I also know that our humans are tryin’ real hard to raise money for an agility yard for us, and to fix our fences…see there’s at least one doggy who’s bein’ a bit naughty and chewin’ the fence up!  Our humans are so puzzled ’cause they can’t figure out who’s doin’ it…  I may know, but I’m not tellin’ ’cause I’m not that kinda dog!

I’m gonna go for now… I gotta get a bath so I look real handsome for tonight!  Bye!!

1 thought on “Brownie (Adopted with Oreo!)”